The benefits of frontier-free science

It’s hard to pin down what we actually lose if the free movement of people and ideas diminishes or dies.

Scotland’s historic close links with Europe help explain its overwhelming vote to stay in the EU.

Free exchange in the fields of medicine and science has brought enormous benefit for ordinary people. Here’s four relatively recent examples. Not that important really – they’ve only saved millions of lives:

The buzz we get from exercise….is caused by the release of endorphins, the natural opiates produced in the brain which were first identified by Hans Kosterlitz and John Hughes in Aberdeen in 1975.  Kosterlitz had fled Nazi Germany in 1934. The lab team was a sociable bunch – piling into the Kirkgate Bar for a post-work pint on a Friday. Hans used to enjoy a glass of Glenmorangie.  He embarked on this critical work well into his retirement from the chair of pharmacology at Aberdeen.

How cells commit suicide….a process known as apoptosis, now fundamental to research into several diseases, particularly cancer. It was  first described  in 1972 by another Aberdeen team led by Sir Alastair Currie who had brought over John Kerr, a bright researcher from Brisbane, Australia to join him and his colleague Andrew Wyllie.

Curing tuberculosis…. the world’s first 100% cure was introduced in Edinburgh by Dublin-born Sir John Crofton’s group in 1954.  They used all three drugs from the outset and meticulously monitored each patient. The trouble was that nobody initially believed their results.  What saved the day was one of the first ever international trials arranged via colleagues at the Pasteur Institute in Paris. Its success in 22 leading European hospitals made the Edinburgh treatment the world’s gold standard for treating TB. 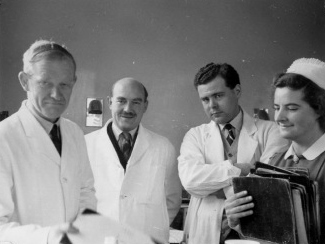 Hepatitis B… another of the world’s nastiest diseases. The revolutionary idea of producing a safe, synthetic vaccine through genetic engineering was first hatched over a lakeside lunch in Geneva. So dangerous was the live virus that Sir Ken Murray had to carry out his work in 1978 at the Porton Down germ warfare establishment. Critical to his success were visits to his colleague Charles Weissmann’s lab in Zurich to get a reagent.  The patents from this work generated more than $100 million in royalties.

Ken was a Yorkshireman who had started out as a lowly lab technician with Boots. He didn’t want a Rolls Royce so he used the money to set up the Darwin Trust to help young molecular biologists in their careers – particularly postdocs from Eastern Europe.

At the other end of the scale, there are things that Scotland prefers to forget.  Italy’s declaration of war in June 1940 triggered looting and attacks on Italian people in several British cities. The most extensive and vicious episodes were in Edinburgh.

But freedom of movement for people and ideas has also had its uses elsewhere in:

Without Polish pilots, the Battle of Britain may have ended in defeat. The Polish Women’s Army  played a key role in British uniforms – on exercise here

Polish mathematicians were the first to break the Enigma code.  And Poland established a whole new medical school in Edinburgh, with the support of Edinburgh and Glasgow university colleagues. There are still exchanges today.

Andrew Schally, a young Polish refugee who had fled the Holocaust, completed his high school education in Scotland in 1946. He was a very good footballer and could have made it as a striker for a Scottish or English club. But he had to settle for another career and winning the 1977 Nobel Prize for medicine instead.

Rebuilding hope in a shattered Europe…..

The Edinburgh International Festival was the idea of Austrian refugee Rudolf Bing who, with the support of Edinburgh’s Lord Provost, had the idea of “recreating Salzburg” in the Scottish capital. The Vienna Philharmonic threw audiences into rapture at the first festival. Bing had a proper job as a partner in John Lewis but he too had to settle for another career in opera management, establishing Glyndebourne and rebuilding the New York Met.

And finally…… there’s the European anthem, Ode to Joy, a good recourse at times when all the world seems to offer is one streak of constant misery.  The most celebrated line Alle Menschen werden Brüder (All People become Brothers) wasn’t in Schiller’s original poem. He changed it after the publication in 1795 of Burns’ equally celebrated poem which ends with That Man to Man, the world o’er, Shall brothers be for a’ that.

Update:  One of the three Scots-born Nobel science laureates in 2016 is Michael Kosterlitz, son of Hans.