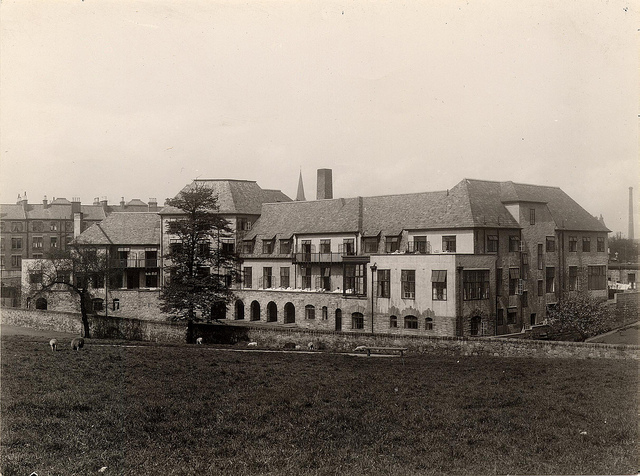 Elsie’s in better times in the 1930s – note the sheep in foreground, long since removed from Holyrood Park along with the maternity hospital. Courtesy of Lothian Health Services Archive

Recent controversies over the centenary of World War One sometimes overlook a key factor – how the survivors wanted it to be remembered by future generations. 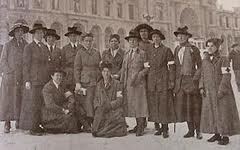 Elsie and colleagues captured in Austria – courtesy The National Archives

In the case of Dr Elsie Inglis, this was quite simple – build maternity hospitals to continue the work she had dedicated her life to before 1914.

Two were constructed – one in Belgrade reflecting the huge sacrifice she and the Scottish Women’s Hospitals Unit (SWHU) volunteers made in Serbia. The other was in Edinburgh, where a public appeal supplemented the remaining funds raised in wartime for the SWHU. 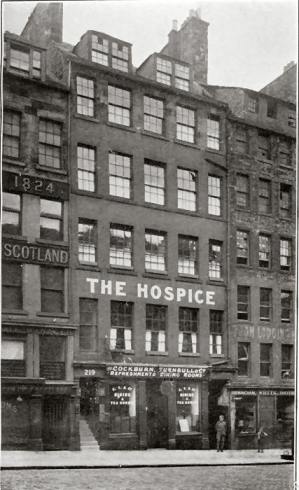 The hospital in Edinburgh was to replace the Hospice which Elsie had set up in 1904. The name a bit of misnomer – it was a maternity hospital run by all-female staff at 219 High Street (part of the Royal Mile) which sounds grand but it was there to serve the poorest families in the Old Town. Inglis’s intentions were clear – she visited the USA in 1913 and at Muskegon, Michigan, found a small memorial hospital as the model she wanted for midwifery in Edinburgh.
The final hospital was completed in 1925 with a glorious outlook across the Holyrood Park. It was incorporated into the NHS in 1948 but forty years later was deemed surplus to requirements along with the Bruntsfield Hospital for Women.
The building was sold and became a nursing home for older people. I should declare an interest here – I and my siblings were all born at Elsie’s and I also covered the closure protest as a Herald reporter. We were repeatedly assured that Elsie’s name would continue to be preserved in a working maternity unit in the city
These pledges were not honoured. Instead, the nursing home has now closed in the wake of the deaths of two patients.
I don’t think this is quite what Winston Churchill had in mind when he praised the women of the Scottish Women’s Hospitals: “….the record of their work, lit up by the fame of Dr Inglis, will shine in history.” Another part of the site is occupied by a private nursery “Bright Horizons family solutions.” It may well be a wonderful nursery but its website merely uses Elsie’s name – there is no further reference to her.
Contrast this with Belgrade where the other Elsie’s is still going strong, despite a NATO air strike in 1999 which killed several patients. It now bears the name of a Serbian doctor Dr Dragiša Mišović but its website fully acknowledges Elsie Inglis and her colleagues who founded it.

Elsie Inglis with hat in the Great Tapestry of Scotland

Back in Edinburgh last year even Elsie’s grave in the Dean Cemetery lay neglected and unmarked. Thankfully, some good blokes at Scot Mid funeral directors have since restored it.There are several plaques in and around Edinburgh and the Clydesdale Bank put her on their £50 note. She also has a prominent place in the Great Tapestry of Scotland. And that’s great.

But what is there that fulfils the original wishes of the Scottish Women’s Hospitals volunteers for a living embodiment of their founder? Something that connects with the present, not just the past.
Involvement in the suffrage struggle made them more determined and resourceful. They hated the propaganda film made in 1917 and contemporary artistic portrayals were also derided by their sisters at the Endell Street Hospital near Covent Garden.
For these reasons alone I am pretty sure they would judge Edinburgh’s attempts at commemoration of Elsie’s legacy as shoddy, shameful … and an utter disgrace.

Their answer now would be in deeds not words.

Update (March 2015) And full marks in that department to the British diplomats who have named the embassy residence in Belgrade after Elsie. Meanwhile, Edinburgh’s neglect not just of her memory but also of the wishes of  her SWH colleagues and the public who wanted it to shine on in a living memorial hospital continues……. 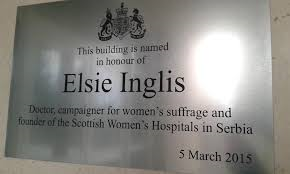 The new Embassy plaque in Belgrade

Easily the best short biography of Elsie Inglis is in the Oxford DNB by the late, and much-missed Leah Leneman.

Campaign banner from the 1980s – courtesy of Capital Collections

Categories: gems from the archive, history on the web, medical and nursing