I really don’t understand why Edinburgh continues to blithely trample on the memory of Elsie Inglis. It’s more through ignorance and indifference but the blundering shows no signs of abating.

Last month did bring official recognition with the naming of an embassy residence in Elsie’s honour – in Belgrade, an inspired initiative by Ambassador Denis Keefe (pictured right) and his team.  He and the Serbian president Tomislav Nikolic (pictured left) unveiled a commemorative plaque.

A parliament also hosted a presentation on the role of Australian volunteers in the Scottish Women’s Hospitals – the Serbian Parliament, proud of the second maternity hospital built by the SWH as a living memorial to Elsie’s work (and still going strong despite a lethal NATO air strike in 1999).

Meanwhile, back in Edinburgh the first of those hospitals continues to lie neglected. It was closed in 1988 and the site sold off.  It is just a stone’s throw from the Scottish Parliament where debates to date have largely been around whether and where to put up a statue to Elsie – entirely missing the point of what she and her SWH colleagues wanted as a legacy.

And the name of Elsie Inglis remains tainted with tawdry scandal – following closure of a former nursing home on the site after the deaths of two patients. The Crown Office has yet to announce its conclusion three years after a police investigation.

It’s a pretty bleak place now – not much to show for the huge enthusiasm behind the public appeal launched in 1918 to build it.

Their purpose was crystal clear- to continue Elsie’s life’s work helping poor Edinburgh mothers and their babies. Her Hospice in the High Street was very cramped – hence the desire for a new hospital.

Courtesy US National Library of Medicine

Living memorials were not that unusual at this time.  The Clan Macrae Society provided a district nurse in the parishes of Kintail and Glenshiel as “this was considered a better form of memorial to the gallant clansmen who had fallen than by wasting money on bricks and mortar.”  By 1926 nurse Elizabeth McPhee (above) fulfilled this role – complete with BSA motorcycle.

The original foundation stone is still there as are two engravings on the outside wall – both of the same woman, Mona Chalmers Watson (née Geddes) a key supporter of the appeal.

She was the first female medical graduate of Edinburgh University and like Elsie was an ardent suffragist. Mona and her doctor husband Douglas had a medical practice in Walker Street very near Elsie’s.

Her own achievements were extraordinary. Amongst other things, she was the founder and first commandant of of the Women’s Auxiliary Army Corps and the first president of the Edinburgh Women Citizens’ Association. 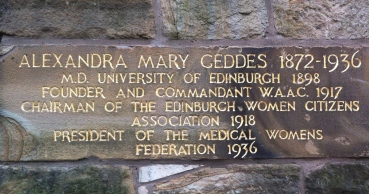 plaques for Mona were restored in 2006 by her descendants.  In any other city you would expect this to be provided by a public body – but, of course, not in Edinburgh.

You can now see them on the Mapping Memorials to Scottish Women site (well worth a look!).

The plaques offer insight into the range and passion of Elsie’s supporters. Common bonds included service with the SWH, the suffrage movement, improving nutrition, medical and nursing organisations, and, above all, concern for the welfare of poor women and their families.

All of this required determination, resourcefulness, and courage.  This is the group which is the real butt of the current insult because Edinburgh appears intent to erase them and their efforts from history.

I think this is largely due to sheer ignorance but others may detect more than a current whiff of the prejudice they faced then – rarely overt misogyny but usually casual indifference laced with patronising condescension when required.

Are there any bright spots?  Yes – a new scheme “The Elsie’s” has been introduced offering NHS Lothian staff grants and bursaries to develop their careers.

It’s a good start. And there is no point looking back with rose-tinted spectacles to disease palaces which belong in the past. Some mothers had bad experiences at the Memorial Hospital. Nor was the old Bruntsfield Hospital for women much good for a mother with a toddler in pram and an appointment on the top floor with no lift.

Needs, practices and demands change over the years.  All it takes is a bit of gumption and imagination to take into account the basic principles established by past generations.

Selling off old assets is not a crime. Selling the soul of Elsie Inglis down the river definitely is. One of the stoutest defenders of that legacy was the redoubtable accountant Helen Lowe whom I interviewed for the Herald in 1993.

Another development last month launched at Edinburgh Castle by First Minister Nicola Sturgeon may still provide an opportunity. The headlines said Edinburgh was the first city in the world to offer the family nurse partnership programme to all eligible mothers.

Whoopy do….. Funnily enough the Hospice was carrying out very similar pioneering work more than 100 years ago. It offered baby clinics in the High Street and health visitors going into “wretched, rotting” homes.  By 1905 it was a recognised centre for training midwives and had set up its first milk depot.

A safe milk supply was essential  providing much-needed nutrition but untreated supplies also harboured deadly bacteria, especially tuberculosis. In 1923 Mona and Douglas Chalmers Watson inherited a farm at Fenton Barns near North Berwick which they developed into a European leader in production of TB-tested milk.

Even poorest mothers preferred to pay for the Hospice’s services than those provided free at Simpson’s. Edinburgh Town Council eventually recognised its merits and replicated the Hospice example across the city. 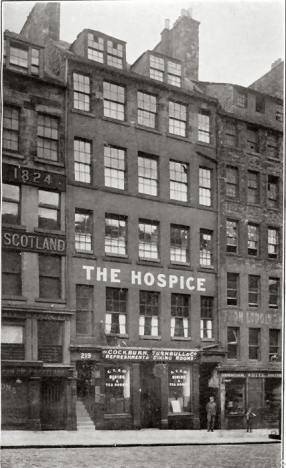 There is no doubt that the Family Nurse Partnership, developed in America and based in Colorado, is an excellent programme which delivers substantial benefit to disadvantaged first time mothers and their babies.

However, I could find no reference in the Scottish Government’s announcement or research papers of any previous efforts to help poor Edinburgh mothers and their children.

This isn’t that surprising. Policy tends to be developed in cycles on the glib assumption that everything in it is new – thus ignoring Congressional librarian Daniel Boorstin’s dictum that making policy without a sense of the past is like planting cut flowers and hoping for the best.

Ironically, history is littered with an extraordinary transatlantic exchange of nursing ideas stretching back to the 1890s when Matron Rebecca Strong’s training scheme for Glasgow Royal Infirmary inspired the establishment of the nursing school at Yale University.

One of Elsie’s close friends Helen Mackenzie and her husband Leslie were guests of honour at the opening of first Frontier Nursing Service hospital at Hyden, Kentucky in 1928, which traced its origins to the Highlands and Islands Medical Service.

Another close friend and co-founder of the Hospice, Jessie Macgregor left Edinburgh to develop a career in surgery in Colorado.  But she contracted meningitis and died in Denver in 1906. Elsie herself found the model of what she wanted the Hospice to be in a maternity hospital at Muskegon, Michigan during a visit to the USA in 1913.

Her plans were curtailed by the war and her own untimely death in 1917. Is it too much to ask that she’ll be better remembered in Edinburgh by the time of the centenary? Or should we just head off to Belgrade instead?

Elsie Inglis with hat in the Great Tapestry of Scotland

Biographical piece by Lucy Inglis in the Lancet

Categories: case studies, history on the web, medical and nursing