All lined up – FNS nurse midwives on parade. The Queens of the Wild Frontier – Courtesy of the Frontier Nursing Service

By 1930 the Frontier Nursing Service had shown that childbirth was safer in a remote area of Kentucky than in most of North America – and even much of Europe.

But for its charismatic founder Mary Breckinridge, it was the start of a decade of nightmares.

She visited Edinburgh in 1929 to be feted by Sir Lewis and Lady Helen Mackenzie and various dignitaries such as Edinburgh’s Lord Provost.  Her fan base extended across the Scotland – Helen Mackenzie had embarked on a lecture tour on her return to raise the service’s profile.

The fundamental difference with the Highlands and Islands Medical Service was that it had a fixed annual government subsidy. This was £42,000 at the outset but it doubled as services were added (although never enough to meet all needs and expectations).

In contrast, Breckinridge had to start from scratch every year to fund salaries for around 30 nurse midwives, plus their horses and other equipment.  Expenses in the first year amounted to almost $26,000.

She had made strenuous efforts to secure base funding for the FNS but it never materialised. Stubborn as ever, she then threw herself into courting private philanthropy through various fund raising committees in major US cities.  The notion of public funding – federal or state – became anathema.

As a result, she was obliged to devote a lot of time fund raising and maintaining public awareness through the media. She excelled at this.

A courier service was set up which brought well-to-do young women (and a few men) for the FNS who rode with the nurse midwives and did basic tasks like tending to the horses..

The first of these was Marvin Breckinridge, whose father was Mary’s first cousin.  Marvin had the bright idea in 1930 of making a film about the service – The Forgotten Frontier which became a milestone of the American documentary movement.

Marvin later developed a career in photojournalism and later became the first female member of the CBS team headed by the celebrated Ed Murrow (of Good Night and Good Luck fame) which reported from London throughout the Blitz.

This  clip (above) shows nurse midwives giving school vaccinations – their role was far wider than midwifery as public health nurses, and health visitors.

The legacy of all this publicity is that we now have a far better insight into the lives of these brave women who were inspired to come and work for the FNS.

For many, it offered an intoxicating challenge. Most were British or Irish. In the absence of any training in the USA, some American nurses joined having studied midwifery in Britain. Some arrived and left soon after – not willing to suffer a life of privation and isolation or the domineering figure of Breckinridge.

Each nurse-midwife had her own patients – poor families scattered off the mountain trails. As in the Highlands they offered a complete nursing and public health service as well as midwifery.  Above all, they had, through necessity, a high degree of professional freedom and responsibility – far more than the strictly regimented and poorly paid drudgery of many hospitals at home.

Complicated cases were referred to an obstetrician at the hospital.  They also worked well with medical colleagues – welfare of mothers was the common priority – not touting for their particular professional interest.

Annie Mackinnon from Skye was one of early recruits. She had served with the French Flag Nursing Corps during World War One and was awarded the Croix de Guerre for conspicuous bravery in continuing to care for the sick and wounded under enemy fire during the retreat from Aisne in the early summer of 1918.

Inevitably, she was given the name “Mac”. She would joke with her Irish colleague Hannah “Nancy” O’Driscoll from Skibboreen, when playing Harry Lauder on the Victrola gramophone about what songs might be played in heaven.

Nancy was a joyful and enthusiastic colleague – she kept her long red hair, unlike their others who wore theirs cut short under an FNS cap. Each had a blouson in Confederate gray and carried necessary gear for nursing and delivery plus snake bite serums in large saddle bags.

The women came together for social evenings at the Big House in Wendover, and the occasional dance.  Practical jokes and jolly japes reinforced their comradeship. Annie Mackinnon, superintendent at Hyden, once tried her hand at brewing beer – but something went wrong and she ended up flooding a meeting of fundraising worthies from Lexington and Louisville in the hospital dining room.

In some respects they were similar to the Royal Canadian Mounted Police. The Mounties always got their man but the Frontier nurse-midwives never left their woman once she had started labour. 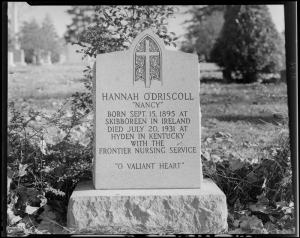 The work could be unrelenting and dangerous. The first to die was Nancy. She had ridden out to care for a mother but stayed with her despite taking ill herself. By the time she got back, Nancy’s appendix had ruptured. She was only 35. Hundreds of grieving patients lined the route of her funeral.

Others came very close to death. Mary Breckinridge herself broke her back in a fall from her horse in 1931.  She survived but she had a long and painful road to recovery and she was plagued by back pain for the rest of her life.

Another glimpse of life on the frontier came in July 1934 from the enterprising Scottish missionary Dr Ruth Young who was conducting a survey of public health nursing conditions in North America and the Far East for the Rockefeller Institute.

In Kentucky she visited the FNS nursing station at Beech Fork where found a compatriot Miss “Stevie” Stevenson in charge.

“She is a cheery soul and good company. She has been with the service for two years” Young noted.

Miss “Stevie” Stevenson – a long way from Clydebank with her charges in Kentucky. Courtesy of SCRAN/University of Dundee archive.

“Formerly two nurses worked here but since the depression which has hit the service badly, there is only one and the area worked has been cut down. A nurse has to be several things besides a nurse here.

“She keeps a cow, a horse, chickens, pigs and grows corn and vegetables. She also cans berries and vegetables for the winter and makes jam.  The blackberries and huckleberries were both sampled and were excellent.

“Miss Stevenson is ideal for his kind of life as she is domestically minded besides loving the life here. It has freedom and adventure and many more thrills than a hospital can provide.”

In the early 1930s, the FNS was left hanging on a thread.  Successive droughts and the Depression almost brought about its demise and certainly put paid to Breckinridge’s hopes that its example might be replicated in rural areas across North America.

What it was all about – an FNS nurse midwife with infant. Courtesy Frontier Nursing University

At times, only the American Red Cross saved local people from starvation. Wealthy benefactors, who included Mrs Henry Ford, had also seen their fortunes wiped out by the Wall Street Crash.

But survive it did and its extraordinary success continued. War in Europe posed an even bigger challenge as the British midwives felt obliged to return. The FNS had to establish its own graduate school of midwifery to train its staff.

Fond farewells were exchanged and they all went to the movies to see Gone with the Wind in Lexington.  Curiously, both the FNS and its inspiration, the Western Isles of Scotland, both managed to feature in Nazi propaganda as examples of the enemy’s “decadence”.

Lester and Mackinnon did their service – and then came back after the war: Kentucky was now their home.

Much changed after the war. Jeeps replaced horses for the nurse midwives and the school’s graduates took their skills around the world.

The Highlands and Islands Medical Service was incorporated into the NHS.  Many regretted its passing and the pioneering trailblazing spirit which inspired it.

Transatlantic nursing links have continued.  Edinburgh University’s establishment of graduate nurse training – the first in Europe – was largely inspired by Elsie Stephenson’s experience at the University of Toronto on a post-war Nightingale  scholarship. The Family Nurse Partnership Programme developed by the University of Colorado has now been widely adopted in Britain.

Jennifer Worth wrote Call the Midwife – her celebrated memoir of her early career in 1950s east London because of the dearth of any histories from midwives themselves.  Television and new digital history resources are fuelling increased public interest.

And the Dewar Committee’s centenary this year formed the subject of a debate in the Scottish Parliament and new initiative seeking to apply its pioneering ideas in the 21st century.

So the trailblazing spirit embodied by brave nurses and midwives in the Hebrides and Appalachia so many years ago is very much alive.

The archive of  Ruth Young’s travels is held at the University of Dundee and is featured on SCRAN.

Barbara Ann Criss’s University of Utah PhD thesis  Culture and the provision of care: Frontier Nursing Service, 1925-1945 is both scholarly and readable with some very good sources. Available here via the Digital Public Library of America.

Like Loading...
‹ Mountain Midwives – Queens of the Wild Frontier (part one)
War turns into Peace – the 1914 Christmas Truce ›