Home › football › Who was the real RS McColl?

Who was the real RS McColl? 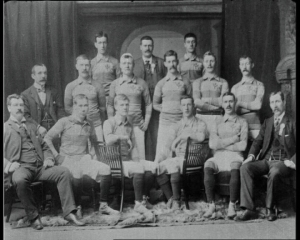 Another gem from British Pathe – featuring Robert Smyth McColl, co-founder of the sweetie shop and newsagent chain which bears his name to this day. Click on the image to view.

He was one of Scotland’s greatest players, scoring a hat-trick in the 4-1 victory over England at Celtic Park in 1900.  The film shows McColl nicknamed “Toffee Bob” bringing his team mates together again for a reunion in London in 1928 where they saw the Scottish team, the Wembley Wizards, go one better with a 5-1 victory.

The clip also makes early use of the dissolve editing technique.  Bob is seen smoking a cigarette and he’s obviously at ease with the camera.

We know more about the man himself thanks to research by sports historian Ged O’Brien. However, the footballing connection doesn’t even get a mention on the website of the successor company Martin McColl, itself a recent merger of large UK newsagent chains.

BBC Radio Scotland made a documentary about him in 2002 and there is a good piece by my old colleague David Belcher who ranks RS McColl as Scotland’s first footie superstar. Dave should know about such types – he’s a Man City fan.

Bob was a genuinely modest and generous man – funding annual trips for his international team mates for games against England. The 1900 game was his last for Scotland.  He played as an amateur for Queens Park before joining Newcastle United as a professional where he used £100 of his £300 signing on fee to set up the eponymous business with his brother Tom.

They saw the benefits of siting their shops next to newly-opened cinemas. Bob then played for Rangers and finally back at Queen’s Park where his six goals against Port Glasgow remains a Hampden Park record to this day.

Strangely, Scotland in 1900 played in pink and primrose rather than dark blue – the colours of Lord Rosebery, honorary president of the Scottish FA and Heart of Midlothian.

Equally bizarrely, they were probably rated the world’s best international team of that era.

Time to play in pink again?

Update: Well, who would have thought it? Scotland decided to reintroduce pink and primrose away strips in 2014. So far, they’ve brought much better results ……