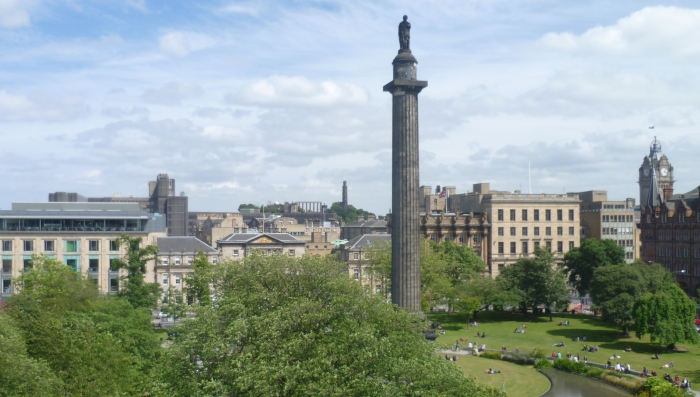 Henry Dundas, the first Viscount Melville, has left us with a problem. Not so much his statue – perched 150 feet above St Andrew Square in Edinburgh he is already out of sight with only defecating pigeons for company.

It’s more the stone column that supports him – all 1500 tons of it.

But with every problem comes an opportunity. Instead of destroying or defacing it, we could harness creative energies and skills to fashion something new. We could call this digitally remastering.

Step one: have a big film screening on St Andrew Square. It has done this before, and the programme could feature contemporary Black Scottish voices like:

Step two: use the column itself. It’s wide and tall enough for projecting images with accompanying sound. 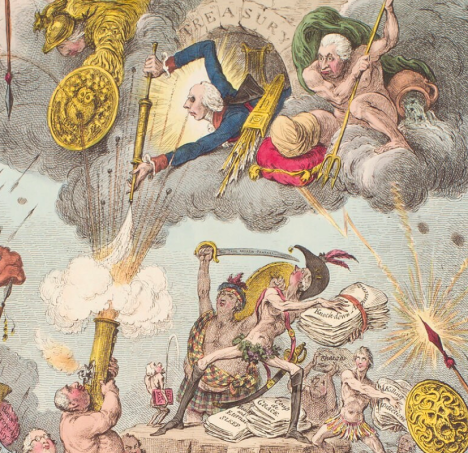 Easy to spot Henry Dundas with cutlass, as portrayed by James Gillray in 1804, courtesy of the National Portrait Gallery

There is no shortage of material – perhaps the cross of St Andrew on the flag of Jamaica, contemporary caricatures of Dundas, or panels from the Scottish Diaspora Tapestry.

Or else the debut football captain who led Scotland to its greatest ever victory over England on South British soil (6-1, Kennington Oval, 1881). He was Andrew Watson – black and Scottish.

Step three: We have time to reflect further on this – there isn’t a statute of limitations on the limitations of statues. Edinburgh has around 200 of them and virtually all have one small thing in common. Essentially, it’s white blokes everywhere set fast in stone, bronze or lead. As was intended. But we can now interrogate them using tools they couldn’t have imagined.

St Andrew Square has been repurposed before – as a hutted village built by the American YMCA in 1918 to serve soldiers on leave from the war.

The south side has been largely rebuilt in recent years and will have a new focus alongside the new St James Centre.

Creative talents across all the arts have been denied expression by Covid-19 which this year for the first time has also drawn the curtain on Edinburgh’s festivals. Thinking caps on…..

For old whiteys like me, Bill Paterson nails things well with his actor’s tale

And something new I learned about Scotland captain Billy Bremner and his efforts to combat the National Front’s activity at Leeds.

Statuesque Jack Docherty’s short (14m) drama which brings Dundas and others to life.