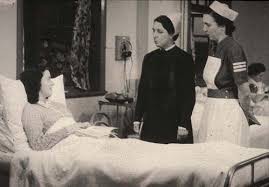 The patient who became a nurse. Click on the image to view the film. Photo courtesy of Lothian Health Services Archive

All tickety boo, according to this short film (9 mins) from the NLS Moving Image Archive. Click on the image to see it.

It’s a public information/propaganda film made by the National Association for the Prevention of Tuberculosis (NAPT) and is set at East Fortune sanatorium in East Lothian.

The notion of a nurse having the time to tell her life story out loud in a public ward isn’t the most credible dramatic platform.The main character went to Edinburgh University intending to be a teacher but contracted TB and, impressed by the nurses who looked after her, decided for a career on the wards instead.

So a bit second best (and ironical, since little more than a decade later Edinburgh became the first European university to offer degree-level nursing courses).

It’s also a lie. Former TB patients were not allowed to train as teachers. Bill McLaren, then a patient at East Fortune, desperately wanted to be a teacher but was denied. That’s why he chose journalism and ultimately broadcasting to become rugby’s greatest ever commentator.

Better days… when the garden was tended

His experience of the new drug streptomycin was also markedly different from the optimistic tone of the film.

“I came closer to despair that time than at any other stage of my career …. the saddest thing was constantly seeing your fellow patients, especially those you had got friendly with and chatted to every day, suddenly decline and then die,” he later wrote.

Scotland was then the only country in Europe apart from Portugal where new cases of TB were continuing to rise unchecked.

Streptomycin worked for Bill but not for three fellow patients who died – as did more than half of the seriously ill patients in Scotland put on trial streptomycin treatment by the end of 1948.

This is probably why the film was made. Morale needed any boost it could get.

Half of those diagnosed with pulmonary TB would die and TB meningitis was certain death for children. It carried a dreadful stigma and young women were particularly vulnerable. One sadistic Edinburgh consultant delighted in telling his young female patients: “You are all rosy red apples, rotten to the core.”

There was a huge shortage of nurses at this time – especially in TB hospitals like East Fortune. Nurses from remoter areas of Britain and Ireland with little acquired resistance were frequent victims of tuberculosis. Many died in their first year of training.

It was this (and a Medical Research Council trial) which finally pushed the BCG vaccine into widespread use in Britain – 30 years after it first became available in France. 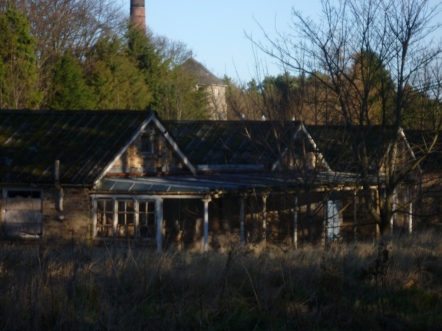 Conditions for nursing staff at East Fortune were also far from ideal, as sister Elizabeth Gow recalled in a 2012 interview for East Lothian Life:

“People accepted what their lot was and just got on with it” she said.

“I had given the streptomycin injections before when I worked in Arbroath. It was good to see patients recovering quickly. They were getting diagnosed earlier and that was a real help.

“The nurses’ accommodation was dreadful. We had a sitting room which leaked badly. We pointed this out to Dr Murray (the medical superintendent). He said it only leaked when it rained – as it did for most of the year.

“We got a petition and raised it with the board of management and it was fixed. Nobody really cared and the food was diabolical.

“But this was on the back of war time when we had been used to rationing. Our expectations were not very high – it was just as well.”

Things did change markedly in the 1950s. East Fortune pressed into service nine wooden huts enabling it to provide to 400 beds for patients, including those from  from Edinburgh.This proved a godsend.

“It was an enormous boon to the people of Edinburgh. This was a very grim period. At that time they would have to wait six months for admission to hospital and quite a number would die waiting,” Jimmy Williamson, a doctor at East Fortune recalled.

Jimmy moved to Edinburgh in 1954 and was the last consultant to join Sir John Crofton’s team which developed the international gold standard cure for TB by using all three drugs from the outset and meticulously monitoring their bacteriological impact in patients..

“I remember my last tuberculosis patient” he said.

“He was a nice chap who had a shadow on his lung.  I told him it was tuberculosis – and he grabbed my hand and said ‘Thank God!“ If I had said that to him ten years earlier, he would have wept. The difference was that he knew he would now be cured – and he was.”

East Fortune went the way of most former TB sanatoria, beds later used for other purposes.  It’s a shame that it has gone downhill since – so much so that the rather elegant buildings in the film are unrecognisable now.

The film’s optimism was premature and unfounded but ultimately vindicated within a decade. There were only three professional actors involved. The rest are real patients, nurses, doctors and other staff. The film is a testament to them.

Bravo to the Moving Image Archive for making it available online. It is a good example of the hidden gems highlighted this week by Martin Scorsese as he backed a new appeal for the archive: “Films shouldn’t be locked away and neglected in a vault somewhere. They  need to be protected and preserved, but they also need to be seen, studied, and enjoyed.”

For more on the NAPT’s extensive film output, see Anna Ritchie’s excellent history of the Stroke Association (formerly the NAPT). It’s on page 18 in part one here. 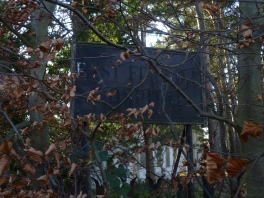