Ignorance about the history of Germany abounds in the UK, although at least Misha Glenny’s series on Radio 4 is now redressing the balance.

School history largely focuses on Hitler and the Nazis and far fewer children are choosing to study German – a shame because it is a brilliantly expressive language.

So it was with a sense of expectation that I looked forward to seeing Bosch’s 125th anniversary.

In fact it currently has two – 125 years since it was founded and 150 years since the birth of founder Robert Bosch.

I found its web centrepiece clunky but there is some very good historical material – especially the virtual exhibition.

And there are good links here with the laudable Bosch Technology Horizon Award. Cash prizes – so well worth entering if you are a school or university student.

In 1886 Robert Bosch set up his “Workshop for Precision Mechanics and Electrical Engineering” in Stuttgart. He had already served an apprenticeship and, intriguingly, worked for Edison in New York and Siemens Brothers in London.

He had a fiery temper and insisted on high standards to the point of perfection. The firm’s first big success was the magneto and then spark plugs.

These literally fired up engines around the world and the motor car into the 20th century. London was its first foreign springboard in 1898.

Absent from the website is a short video or two to appeal to the huge audience of Top Gear types who have a passionate interest in what’s under a car bonnet. Add some film from a rich archive vein and a racy commentary by Jeremy Clarkson or similar and a you could tell the Bosch story in a really engaging way.

Like many corporate histories – and not just those in Germany – it is coy about activities in the world wars when Bosch plants overseas were expropriated.

Robert Bosch’s own philosophy was far removed from Nazism. He died in 1942.

What is remarkable is the way Bosch was able to bounce back after two wars  – despite the name and its similarity to the French derogatory slang for German soldiers.

This history has relevance in the current European economic gloom where Germany clearly performs better than other countries.  This may be due to several factors like education where technical training is valued as much as academic, workers are well rewarded,  and, critically, have a real stake in running their company.

By contrast, British firms often pay more attention to delivering six-monthly profits for shareholders, many retain strict historic demarcation between bosses and workers, and parity of esteem for relative contributions is distinctly absent.

Robert Bosch’s model of corporate governance sought to secure long-term entrepreneurial freedom to innovate and guarantee investment in the future. 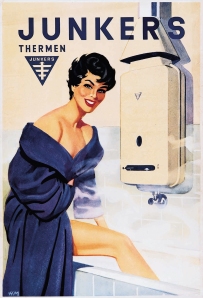 Its ownership structure is unique – even in Germany.  Some 92 per cent of the share capital of the company is owned by a charitable trust, Robert Bosch Stiftung. The majority of voting rights are held by an industrial trust, Robert Bosch Industrietreuhand which is responsible for the company’s entrepreneurial functions.  It also remains a family business, with a proportion of shares still held by Robert Bosch’s successors.

This is the most intriguing aspect for external audiences – and I would have liked to have learned more about it.   What looks like an important document is only available in full by ordering a hard copy.

Nonetheless the available online content is fascinating. A Worcester Bosch boiler was fitted in our house fitted last week, so it’s interesting to see its prototype from the 1950s – about the age of our old one.  Bosch took over  Hugo Junkers‘ gas boiler business in 1932.

There is a lot more about  early household appliances and machine tools and the 75th anniversary of the first diesel passenger car. You will need a bit of patience but there are many historical  gems in the video portal which give a flavour not only of Bosch but Germany in the post-war period.

I suspect Bosch, like my new boiler, will be around for some time yet.